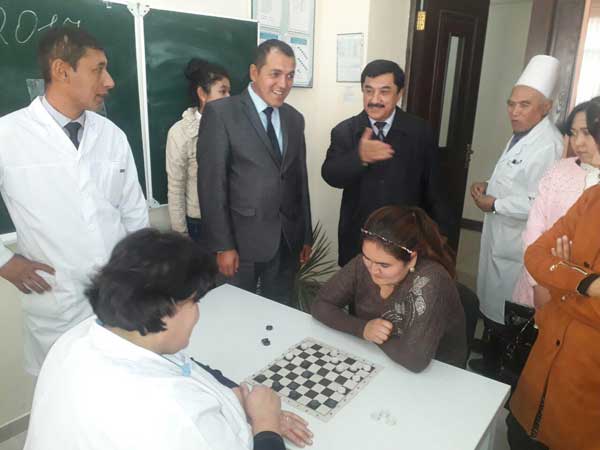 The students of the faculty of Natural science of Andijan State university, group #301 K, direction of Chemistry, group leader of “Uzbekistan Union of Youth” A. Gafurov and group activist N.Turgunova organized draught competition among the students in the room # 515 in the department of Chemistry in order to spend the spare time of the youth useful and on behalf of 17th November-the International Students’ Day.
The chairman of the Chemistry department Y.Isaev opened the ceremony and wished participants a good luck. Competition was held separately between women teachers and students and men teachers and students. Partners have been chosen by sortition. Only one couple reached the end of the competition. Group leader of the group #301 N.Tulakov played with the chairman of the Chemistry department Y.Isaev and Sh. Kirgizov and won. In the competition among boys and girls of different directions like chemistry, biology and physics have competed with a number of other candidates. The student of the direction of biology M.Axmadjonov and The student of the direction of physics Sh. Kazakov were the finalists among boys. Girls of the directions of physics and biology were the finalists among girls. Group leader expressed his gratitude by saying “Thank you” and wished good luck. He advised to continue organizing such actions in the future.
Tulanova Ugiloy, author of the photo: Iminova Xurshida students of group #"301-Х"