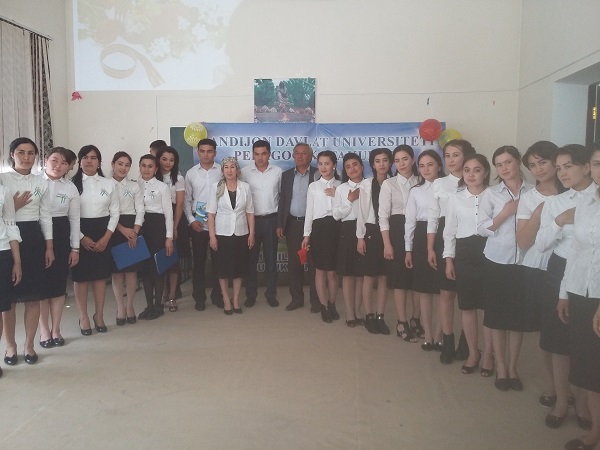 As long as there is a memory, nation is alive, pride is alive. Memory is the power that makes folk into nation. Memory is light that brightens tomorrow.

According to the presidential decree of the Republic of Uzbekistan SH.Mirziyoyev “On preparation and the holding process of Remembrance and Veterans’ day” on April 16, 2018. Some ceremonies should be held under the mottos “The honour of Human is great, memory is sacred”, “Bravery, duty and faith”.

The memory party under the motto “ Memory is eternal value is sacred that is devoted to “May 9 Remembrance and Veterans’ day” was held at Andijan state university, the second-year students who study in the faculty of pedagogy in the group 202.

The party was held according to guidance and instructions of the dean of the faculty of pedagogy, professor Charosxon Shokirova, the assistant of the dean Qamariddin Nuriddinov, the chairman of union of Youth and faculty BTSTI  lhomjon Boltaboyev, the knowledgeable teacher of the department of methodology of primary and secondary education Surmaxon Isroilova and head teacher Lazizbek Moydinov played a main role for the preparation of the party.

The main purpose of conducting  party is to bring young people with affection good morality and faith for our rituals to  intake patriotism into their life, to remember the memory of people died in World War II eternally to refine our country’s prestige, to contribute the process of bringing children with good morality.

The party was opened with  the dean and professor CH.Shakirova’s words and she emphasized on the people who fought in World War II, service behind war and independence day. People say humanity is precious indeed, our ancestor’s life  precious for us.

People say where there are old people, there are angels. Therefore, we should also revere them respect them as much as we can do  take prayers from them and we should thank for our peaceful  days. She also said to give financial help to the families of people who fought in the war, service behind war and died while  fighting. Party started with the brief words of our president Shavkat Mirziyoyev.

At the end of the party this group’s girs Shaxlo Arslonova, Gulruxsor Ahmadjonova, Dilnoza Muxriddinova and Arofat Isroilova performed the dance of “KATYUSHA” and the audience applauded and sang with the song. Girls showed their competence and gained their kindness. Professor and dean CH.Shakirova awarded active students. Whenever the old opened their hands for prayers, they usually say We saw the war, and we want you not to see it again. Value your happy times and be knowledgeable and crafty. Thanks to our president Sh.Mirziyoyev the lifestyle of people of our country has changed.  Our today is better than yesterday, our tomorrow will be better than today, this is building a big confidence in people’s lives. 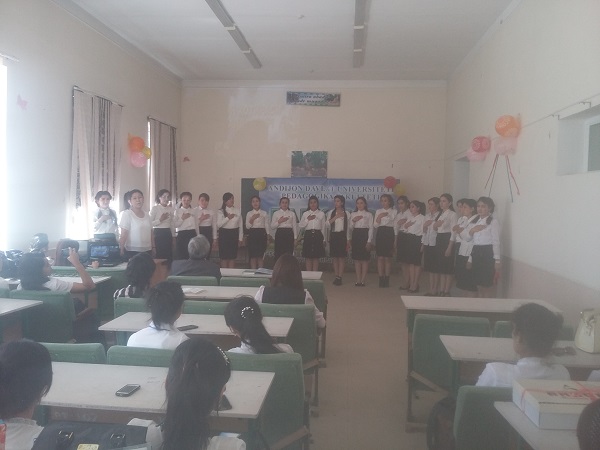